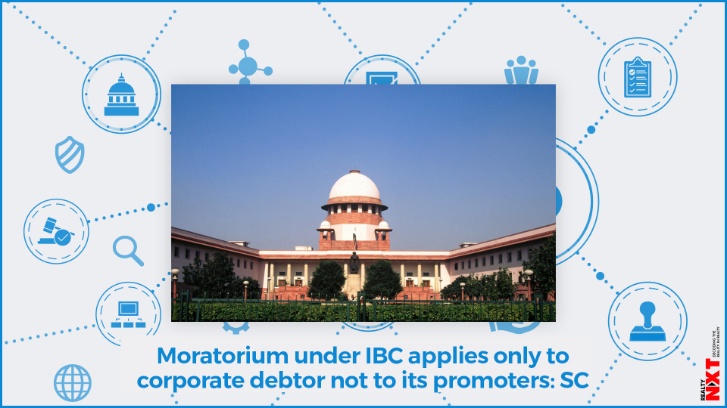 A bench of Justices DY Chandrachud, Vikram Nath and Hima Kohli allowed the home buyers to move against the promoters of the first respondent Corporate Debtor (Today Homes and Infrastructure Pvt Ltd), even though a moratorium has been declared under Section 14 of the IBC.

The Supreme Court has held that moratorium under provisions of Insolvency and Bankruptcy Code (IBC) which restrains initiation of any fresh proceedings or discontinuance of existing ones applies only to the Corporate Debtor but does not protect the promoters of the stressed company.

The top court observation came in an order related to builder-home buyers’ dispute arising out of non-completion of the housing project.

A bench of Justices DY Chandrachud, Vikram Nath and Hima Kohli allowed the home buyers to move against the promoters of the first respondent Corporate Debtor (Today Homes and Infrastructure Pvt Ltd), even though a moratorium has been declared under Section 14 of the IBC.

The bench while referring to a verdict given earlier this year said that this court had held that proceedings under Negotiable Instruments Act against the Corporate Debtor would be covered by the moratorium provision under Section 14 of the IBC.

“However, it (earlier verdict) clarified that the moratorium was only in relation to the Corporate Debtor and not in respect of the directors/ management of the Corporate Debtor, against whom proceedings could continue”, it said in its order passed recently.

The bench said, “We thus clarify that the petitioners (home buyers) would not be prevented by the moratorium under Section 14 of the IBC from initiating proceedings against the promoters of the first respondent Corporate Debtor in relation to honouring the settlements reached before this Court”.

The bench noted that home buyers have urged it to direct that the personal properties of the promoters be attached in view of the provisions contained in the Resolution Plan.

It said, “The Resolution Plan is still to be approved by the Adjudicating Authority (National Company Law Tribunal) under the provisions of Section 31(1) of the IBC. Hence, at this stage, when the Resolution Plan awaits approval, it would not be appropriate for this Court to issue a direction of that nature”.

The bench said that after the Resolution Plan is approved under the provisions of Section 31(1), consequences emanating from the statutory provision would ensue to the benefit of the home buyers.

“Hence, we have already directed that the NCLT shall dispose of the approval application filed on August 21, 2021, within a period of six weeks from the date of receipt of a certified copy of this order,” it said.

A group of Home buyers of a group housing project, Canary Greens in Sector 73 of Gurgaon in Haryana, which is being developed by the ‘Today Homes and Infrastructure Pvt Ltd’ were aggrieved by abandoning of the project by the builder.

They claimed that as per their agreement with the realty firm, the possession of the apartments was to be delivered within a period of thirty-six months, which in almost all cases was to be in 2014. The home buyers approached the National Consumer Dispute Redressal Commission (NCDRC) seeking refund of their moneys with interest.

On July 12, 2018, the NCDRC allowed their claim by directing the realty firm to refund the principal amount paid by the petitioners together with 12 per cent interest from the date of deposit along with costs within four weeks.

After the builder failed to pay the refunds as per the order, the execution proceedings were instituted by the home buyers before the NCDRC, which sought response from the realty firm.

The firm then approached the Delhi High court in separate proceedings also initiated by another set of home buyers, which in turn stayed the NCDRC order.

After that certain settlement terms were offered by the realty firm which were not acceptable to the decree holders.

The NCDRC on March 11, 2019 directed the Managing Director of the realty firm to appear personally.

The Delhi High Court on March 27, 2019 directed that no coercive steps shall be taken against the Managing Director of the company in terms of the order passed by the NCDRC.

The matter then reached the top court but during the pendency of pleas on October 31, 2019, proceedings were initiated against the realty firm before the NCLT under Section 9 of the IBC by an operational creditor.

The NCLT Authority admitted the petition, following which the corporate insolvency resolution process was initiated and a moratorium was declared under Section 14 of the IBC.

Another set of home buyers moved the top court claiming that the application filed for the initiation of corporate insolvency against the realty firm was merely to stall the refund of the amount due to them.