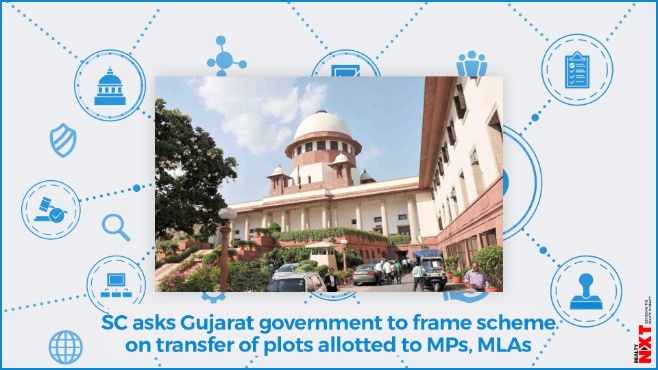 The bench was hearing an interim application of an MLA, represented by lawyer Saurav Mishra, that the earlier order of the court be modified to permit allottees to transfer the property if the motive is not to earn profits.

The Supreme Court on Thursday asked the Gujarat government to come out with a scheme or guidelines on issues such as transfer of plots which were allotted allegedly at concessional rate to MPs, MLAs, ministers and some judges of the state High Court.

“Let the state come out with the guidelines or schemes on the entire issue,” a bench comprising Chief Justice N V Ramana and Justices Surya Kant and Hima Kohli said when a counsel for a state lawmaker urged that the allotted plot may be allowed to be transferred if the motive is not to earn profit from the transaction.

The bench was hearing an interim application of an MLA, represented by lawyer Saurav Mishra, that the earlier order of the court be modified to permit allottees to transfer the property if the motive is not to earn profits.

“We will see, first let the state come out with the scheme or guidelines,” the bench said.

Lawyer Prashant Bhushan, appearing for petitioner Maulin Barot, said that the plea pertained to allotment of plots at a concessional rate to the lawmakers in Gujarat and the matter was initially taken up by the Gujarat High Court.

Seeking final hearing of the case, Bhushan said that many high court judges recused themselves from hearing the case as plots were allotted to some judges as well.

“Mr Bhushan, we will give a date for final disposal later,” the bench said.

The plea was last put up before a bench on July 20, last year when the bench had ordered that the plea along with the case, received on transfer from the Gujarat High Court, be listed together after four weeks.

This case has got a history of recusals in apex court as well as Justice Dalveer Bhandari, who is now a judge in the International Court of Justice (ICJ), was the first to recuse in 2011.

Then Justice Sudhansu Jyoti Mukhopadhaya, since retired, recused and later the bench asked the state government to place on record the copy of the policy under which the plots were allotted to the MLAs and MPs at a concessional rate be placed on record.

The court had once asked the High Court to decide the case but later transferred to itself the matter for adjudication as the case had remained inconclusive there.

The counsel for the state government had said that it has not made any “fresh allotments after the year 2000 and as a matter of fact, the entire policy for such allotments is being re-examined”.