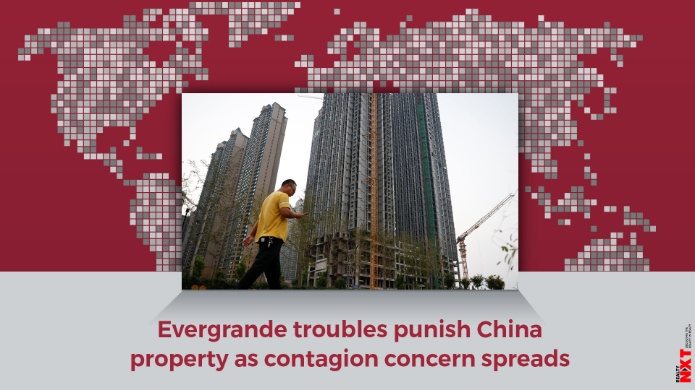 A major test comes this week, with Evergrande due to pay $83.5 million in interest relating to its March 2022 bond on Thursday. It has another $47.5 million payment due on Sept. 29 for March 2024 notes.

Growing fears of a default by China Evergrande Group led investors worried about its potential impact on the wider economy to dump Chinese property stocks and seek refuge in safe-haven assets elsewhere on Monday.

Shares in Evergrande, which has been scrambling to raise funds to pay its many lenders, suppliers and investors, closed down 10.2% at HK$2.28 on Monday, after earlier plummeting 19% to its weakest level since May 2010.

Regulators have warned that its $305 billion of liabilities could spark broader risks to China’s financial system if its debts are not stabilised.

A major test comes this week, with Evergrande due to pay $83.5 million in interest relating to its March 2022 bond on Thursday. It has another $47.5 million payment due on Sept. 29 for March 2024 notes.

Both bonds would default if Evergrande fails to settle the interest within 30 days of the scheduled payment dates.

In any default scenario, Evergrande, teetering between a messy meltdown, a managed collapse or the less likely prospect of a bailout by Beijing, will need to restructure the bonds, but analysts expect a low recovery ratio for investors.

Evergrande executives are working to salvage its business prospects, including by starting to repay investors in its wealth management products with real estate.

“(Evergrande’s) stock will continue to fall, because there’s not yet a solution that appears to be helping the company to ease its liquidity stress, and there are still so many uncertainties about what the company will do in case of a restructuring,” Kington Lin, managing director of Asset Management Department at Canfield Securities Limited, said.

Lin said Evergrande’s shares could fall to below HK$1 if it is forced to sell most of its assets in a restructuring.

In a sign of the risk aversion rippling through markets, world shares skidded and the dollar firmed as investors fretted about the spillover risk to the global economy.

Despite mounting worries about the future of what was once the country’s top-selling property developer, analysts, however, have played down comparisons to the 2008 collapse of U.S. investment bank Lehman Brothers.

“First, the dollar bonds will likely get restructured, but most of the debt is in global mutual funds, ETFs, and some Chinese companies and not banks or other important financial institutions,” said LPL Financials’ Ryan Detrick.

“Lehman Brothers was held on nearly all other financial institution’s books,” he said. “Secondly, we think the odds do favor the Chinese communist government will get involved should there be a default.”

Policymakers in China have been telling Evergrande’s major lenders to extend interest payments or rollover loans, but market watchers are largely of the view that a direct bailout from the government is unlikely.

The People’s Bank of China, its central bank, and the nation’s banking watchdog summoned Evergrande’s executives in August in a rare move and warned that it needed to reduce its debt risks and prioritise stability.

Trading of the company’s bonds underscore just how dramatically investor expectations of its prospects have deteriorated this year.

Goldman Sachs said last week that because Evergrande has dollar bonds issued by both the parent and a special purpose vehicle, recoveries in a potential restructuring could differ between the two sets of bonds, and the process may be prolonged.

Investors, meanwhile, are increasingly worried about the contagion risk, mainly in the debt-laden Chinese property sector, which along with the yuan came under pressure on Monday.

The yuan fell to a three-week low of 6.4831 per dollar in offshore trade.

Hong Kong-listed Sinic, which saw massive selling pressure, has nearly $700 million in offshore debts maturing before June 2022, including $246 million due in a month — a bond which has tumbled to around 89 cents on the dollar.

Sinic has a junk rating from Fitch, which downgraded its outlook to negative on Friday.

Other property stocks such as Sunac, China’s No.4 property developer, tumbled 10.5%, while state-backed Greentown China shed around 6.7%.

Guangzhou R&F Properties Co said on Monday it was raising as much as $2.5 billion by borrowing from major shareholders and selling a subsidiary, highlighting the scramble for cash as distress signals spread in the sector.