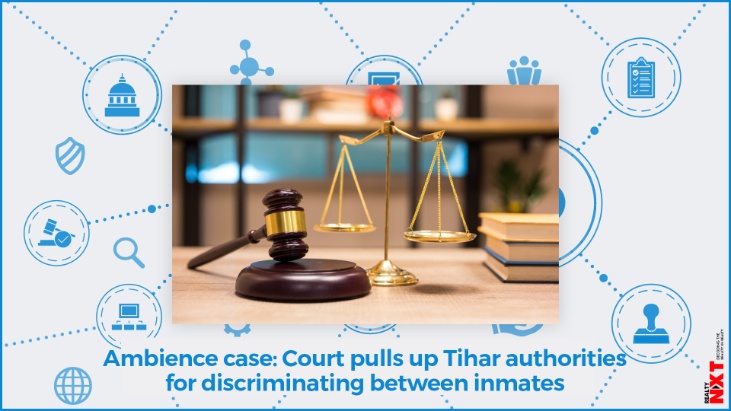 The central probe agency had raided Gehlot, his company Aman Hospitality Private Limited (AHPL), some other firms of the Ambience group, director in the company Dayanand Singh, Mohan Singh Gehlot, and their associates in July last year.

A Delhi court has pulled up Tihar jail authorities for “discriminating” between its inmates in providing certain facilities.

While hearing a money-laundering case against Ambience group promoter Raj Singh Gehlot and others in relation to an alleged bank loan fraud of Rs 800 crore, additional sessions judge Dharmender Rana noted that the businessman was seen keenly observing the court proceedings using a headphone.

The judge said that the facility of the headphones provided to the inmates by the jail authorities, to witness the court proceedings, is a very welcome initiative.

“However, unfortunately, for the reasons best known to jail authorities, I have not seen the jail authorities extending the same privilege to the other inmates attending the court proceedings through video conferencing,” the judge said while hearing the case on October 5.

He said that “In my considered opinion, the state cannot afford to adversely discriminate other inmates by denying them the similar facilities/ privileges as extended to accused Gehlot in the instant matter. The other inmates are equally entitled to effectively participate in the court proceedings using a similar headphone as provided to the accused herein.”

The judge directed the DG, Prisons to look into the matter and apprise the court as to why a similar facility was not being provided to the other inmates who are attending the court proceedings through video conferencing.

The court, meanwhile, summoned some of the accused persons after taking cognisance of a chargesheet, filed by ED’s special public prosecutor N K Matta, in the case.

According to ED, the case against Gehlot, who is also a promoter of the Ambience Mall in Gurugram, is based on a 2019 FIR of the Anti-Corruption Bureau of Jammu against AHPL and its directors for alleged money laundering in the construction and development of the five-star Leela Ambience Convention Hotel located at 1, CBD, Maharaj Surajmal Road, near the Yamuna Sports Complex in Delhi.

The central probe agency had raided Gehlot, his company Aman Hospitality Private Limited (AHPL), some other firms of the Ambience group, director in the company Dayanand Singh, Mohan Singh Gehlot, and their associates in July last year.

The ED probe found that “a huge part of the loan amount of more than Rs 800 crore, which was sanctioned by a consortium of banks for the hotel project, was siphoned off by AHPL, Raj Singh Gehlot and his associates through a web of companies owned and controlled by them.”

“A substantial part of the loan money was transferred by AHPL to several companies and individuals on the pretext of payment of running bills and advance for the supply of material and work executed,” the agency had alleged.

The employees of the Ambience group and Gehlot’s associates were made directors and proprietors in these companies and Gehlot was the “authorised signatory” in many of these entities, it had said.

No material was supplied and no work was executed and almost the entire amount was immediately routed back to the entities owned by Raj Singh and Sons HUF (Hindu undivided family) and his brother’s son, it said.

“Money was further siphoned off through multiple layers in a complex web of group entities,” the ED said.