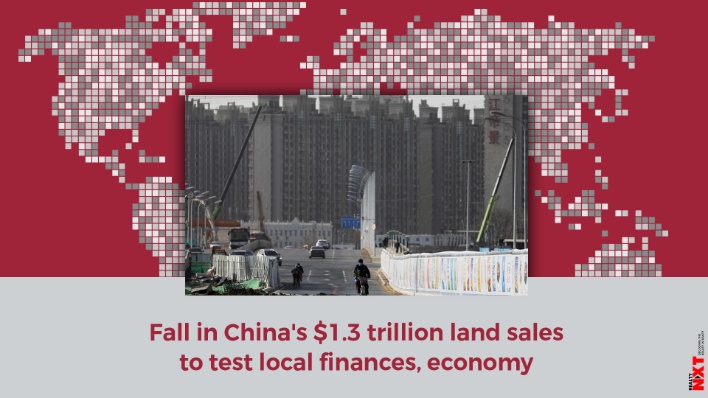 Sagging demand at China’s urban land auctions amid a crackdown on borrowing by private developers risks squeezing regional finances, pressuring local governments to scramble for other income sources to fund investments and support the economy.

But tighter regulations on borrowing by private developers since the summer of last year are increasingly eroding demand for land. The value of nationwide land sales abruptly fell 17.5% on year in August, according to Reuters calculations of finance ministry data, the biggest slide since February 2020.

Further falls could force regional governments, who on average depend on land sales for a fifth of their revenue, to cut spending and investment. Many economists have already downgraded China’s 2021 GDP growth forecast, due to a cooling property market and contagion risks from indebted property behemoth China Evergrande.

To boost incomes, some local governments may be driven to issue more bonds, increasing their debt obligations. They may even hasten plans for a controversial property tax, analysts say.

“In general, the proportion of land sales revenue for local governments in China is quite large, at over 20%, so if land sales decline, or their growth slows, local government spending will see a certain amount of pressure,” said Betty Wang, senior China economist at ANZ in Hong Kong.

To better control land prices in the country’s most valuable locations, and by extension, prices of finished homes, authorities said in February that China’s 22 biggest cities can only conduct three rounds of land auctions this year.

The authorities have also since put a cap on the highest bids to contain prices, as part of a vast crackdown across sectors as President Xi Jinping seeks to correct excesses and imbalances in China’s economy and society.

But since the first round of auctions in March-June, demand has fallen as cash-strapped developers stayed away.

In an ongoing round of auctions in June-October, about 40% of the plots on offer were withdrawn or had no bidders as of Sept. 30, a Reuters analysis of over 1,000 public notices showed. That compared with 5% of untaken offers in the first round.

Tianjin in northern China sold 40 out of 61 plots, while Shenyang, the provincial capital of Liaoning, offloaded 19 of 46 lots, the Reuters analysis showed.

Moody’s predicts land sales growth will be in the low single-digits in 2021 before declining in 2022. Sales grew 16% last year.

To offset poorer sales, local governments could issue more bonds, but that would raise the prospect of a higher debt burden, Moody’s warned in a report.

Highly-indebted Tianjin and Liaoning may struggle to meet debt obligations if land sales worsen, according to Moody’s.

State firms have dominated land auctions as private developers stuck to the sidelines, but it is uncertain whether this would be enough to safeguard local government revenues.

The value of winning bids by state firms have been triple that of private developers in the June-October auctions so far, marking a departure from past trends. But, as of Sept. 30, their overall bids were down 45% to 277.2 billion yuan from the March-June auctions.

In the southwestern megacity of Chengdu, state-controlled China Railway Construction Corp placed bids for 15 plots of land and put down a whopping deposit of 4.28 billion yuan ($662 million).

In contrast, private developers such as Fantasia Holdings and China Fortune Land have spent less on land purchases this year than in 2020, or nothing at all, according to the Reuters analysis. Evergrande, through a local developer, bought only one plot this year in June, the analysis showed.

When contacted by Reuters, Fantasia said it will control the pace of land acquisitions in line with its debt management, and that it currently has sufficient land reserves.

The other companies did not respond to requests for comment.

Seven out of China’s 22 biggest cities have until the end of October to auction land, including Beijing and Shanghai.

China has mulled a nationwide property tax for over a decade but faced resistance from stakeholders including local governments themselves, who fear it would erode property values or trigger a market sell-off.

“Start with the pilots, and rules can be adjusted accordingly,” she said.