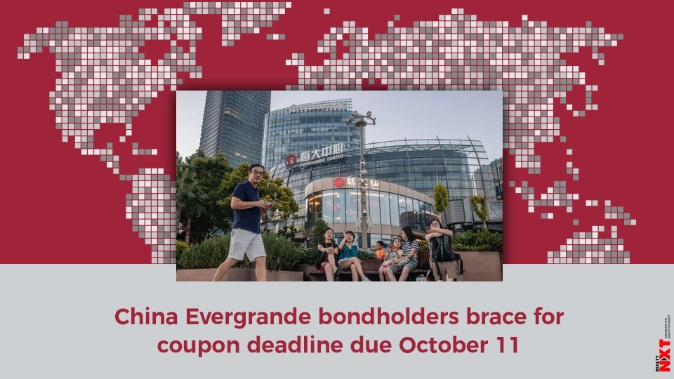 Expectations that the company will make the semi-annual payments on its April 2022, April 2023 and April 2024 notes due Oct. 11 are slim as it prioritises onshore creditors and remains silent on its dollar debt obligations.

Expectations that the company will make the semi-annual payments on its April 2022, April 2023 and April 2024 notes due Oct. 11 are slim as it prioritises onshore creditors and remains silent on its dollar debt obligations.

That has left offshore investors worried about the risk of large losses at the end of 30-day grace periods as the developer wrestles with more than $300 billion in liabilities.

Evergrande’s troubles have sent shockwaves across global markets and the firm has already missed payments on dollar bonds, worth a combined $131 million, that were due on Sept. 23 and Sept. 29.

Advisers to offshore bondholders said on Friday that they want more information and transparency from the cash-strapped property developer.

The offshore bondholders are also demanding more information about Evergrande’s plan to divest some businesses and how the proceeds would be used, the advisers said.

Trading in shares of Evergrande, as well as its Evergrande Property Services Group unit, has been halted since Oct. 4 pending a major deal announcement. On Monday, the company’s electric vehicle unit swung between large losses and gains, falling as much as 4.65% and rising by up to 9.28%.

“We believe policymakers have zero tolerance for systemic risk to emerge and are aiming to maintain a stable property market, and policy support could be forthcoming if the deterioration in property activity levels worsen,” said Kenneth Ho, head of Asia Credit Strategy at Goldman Sachs.

“That said, we also believe that policymakers do not want to over-stimulate, and their longer term goal is to deleverage the property sector. Finding the right balance may require more time, and the uncertainties are likely to be a continued source of volatility for the China property (high-yield) market.”