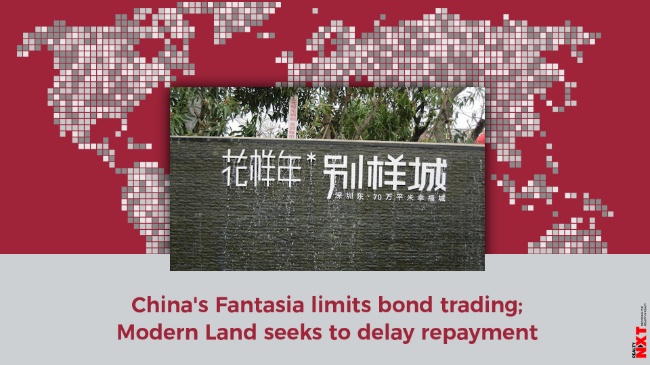 Modern Land (China) Co, a smaller developer, said it was seeking consent from investors to extend the maturity date of a dollar bond due on Oct. 25 by three months in order to avoid a default.

Cash-strapped Chinese property developer Fantasia Holdings’ unit limited trading in its Shanghai bonds on Monday, a move seen to be aimed at curbing volatility often ahead of defaults, following a credit downgrade.

Modern Land (China) Co, a smaller developer, said it was seeking consent from investors to extend the maturity date of a dollar bond due on Oct. 25 by three months in order to avoid a default.

Modern Land’s chairman and president also intended to provide the company with shareholders’ loans of 800 million yuan ($124.35 million) in total, expected to be completed within the next two to three months, the company said in separate filings.

The measures taken by both companies highlight the fallout from China Evergrande Group, struggling under $305 billion in debt, to the rest of the high-yield sector hit with drying liquidity and slowing sales.

Fantasia Group China Co, controlled by Fantasia Holdings, said in a filing its bonds will now only change hands through negotiations, after a downgrade by China Chengxin International Credit Rating Co (CCXI).

They previously traded on an auction system at the Shanghai Stock Exchange.

Two bonds of Fantasia Group were suspended from trading by the exchange on Friday following a slump, after Fantasia Holdings missed the deadline on a $206 million international market debt payment on Oct. 4.

Traders said changes in the trading mechanism by Chinese issuers – often ahead of defaults in their bonds – are likely aimed at limiting participation and curbing volatility.

Cai Hongfei, property analyst at Central Wealth Securities, said the changes could reflect a desire to protect investors as many Chinese developers face an uncertain future.

For many non-state-owned Chinese developers, the goal is to survive the next three months, he said. “Asking about their repayment plan in 6 to 12 months is a question they simply cannot answer.” Hengda Real Estate Group Co Ltd, the flagship unit of Evergrande, also adjusted the way its onshore bonds are traded, turning from auctions to negotiated transactions since mid-Sept.

Fantasia Holdings said in a Hong Kong filing on Friday it had appointed Houlihan Lokey and Sidley Austin as its advisers to assess its capital structure, evaluate liquidity and explore solutions to ease its current liquidity issue.

Fantasia Group added in the Monday statement the group plans to enhance its short-term repayment ability by disposing assets.

Fantasia Holdings’ Chairman Pan Jun said at a forum last month that if real estate policies continue to be tight into next June, 60% of privately-run developers may collapse on poor sales.

Most of Evergrande’s and Fantasia’s bonds have already lost around 80% of their value.

The developer also proposed to redeem 35% of the principal amount and pay a consent fee of $1.00 for each $1,000 to the holders.