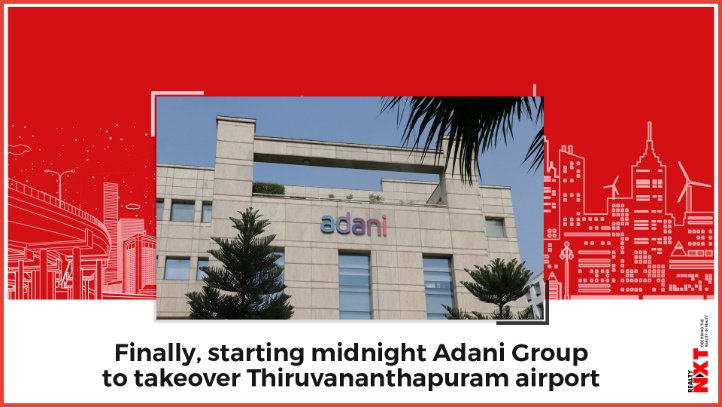 Almost a year after the State government suffered a big setback when the Kerala High Court dismissed their plea against Centre’s move to lease out Thiruvananthapuram international airport to Adani Group, starting midnight Thursday, the running of the airport here will be handed over to the Adani Group by the Airports Authority of India (AAI).

This airport, which was declared as the fifth international airport in the country in 1991, will now be run by the Adani Group for the next five decades.

In February 2019, the financial bid for privatising five airports in the country was opened and it was won by Adani Enterprises.

The other airports that the Adani firm got are situated in Mangaluru, Ahmedabad, Lucknow and Jaipur.

After losing the bid, the Kerala government approached the Kerala High Court, but failed to get a favourable direction, following which they along with the Airport Employees Union approached the Supreme court and the case is going on.

Consequent to the takeover, for the next three years the employees of the AAI along with the Adani’s will run the airport, after which they can either become part of the new group or get transferred to any of the other airports of the AAI.

Speaking to IANS, an airline official on condition of anonymity said what Adani needs to concentrate on is to increase the connectivity and the number of flights.

He also added that since Air India has now been taken over by Tata’s, one will have to wait and see how much pressure the Adani’s can put on Tata’s.

“If this airport has to become really successful, Adani’s should ensure there are direct flights from here to Europe, the US and to Australia through Singapore. After the Covid pandemic struck, flights to Singapore have not happened. Singapore is a crucial hub,” added the official, who did not wish to be identified.

Incidentally, for the Adani’s, they have the added advantage of building the Vizhinjam international seaport, which is coming up a few kilometres from the airport and one has to wait and see how best they are going to use it.