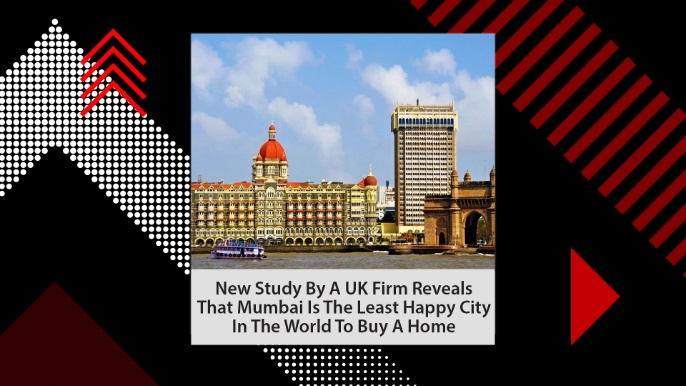 A UK firm called Online Mortgage Advisor revealed the ‘most happy’ and ‘least happy’ places in the world to buy a house.

Mumbai is already known for its prohibitive realty prices, and now it turns out that the Maximum City is the least happy place in the world to buy a home.

An analysis by a UK firm called Online Mortgage Advisor revealed the ‘most happy’ and ‘least happy’ places to buy a house.

They used Artificial Intelligence to scan the faces of photos of Instagram users who posted with the hashtags #selfie and #newhomeowner. “We began our study by sorting through hundreds of thousands of geotagged Instagram posts from all over the world to find out how the happiness levels of the average Instagram user compared to those who have recently purchased a home. We then used an AI facial recognition tool to discover the most dominant emotions displayed in the faces in every photo,” the study stated. It was found that happiness was the dominant emotion in a staggering 83% of the photos they found of recent homebuyers.

Besides Mumbai occupying the numero uno position, the list has Gujarat’s Surat occupying the fifth position. Other cities in the list are Atlanta in the United States and Naples in Italy.

Throwing more light on the methodology, the study says: “Every photo in our analysis was scanned with the Microsoft Azure facial recognition tool. Microsoft Azure analyses clear photos of faces and automatically provides a score on the levels of different emotions present.

The firm came up with a ‘happiest cities in the world to buy a home’ list too. Interestingly, five cities from India find places in this list, with Chandigarh leading the way at the fifth position. The other Indian cities mentioned are Jaipur (10), Chennai (13), Indore (17), and Lucknow (20).