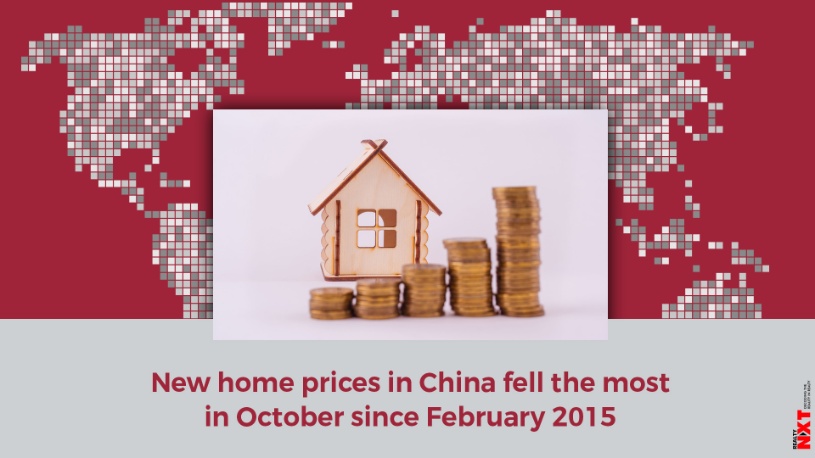 Most analysts, however, expect demand and supply to return to more normal conditions by the end of the year or early 2022 as regulators tweak their policies to stabilise the sector.

China’s property woes worsened on all fronts last month, as price falls in both new and resale homes amid deeper contractions in construction starts and investment by developers piled pressure on the sector in a rare confluence of declines.

The Chinese property market, accounting for a quarter of gross domestic product by some metrics, has slowed sharply since May, with sentiment increasingly shaken by stress in the sector in the wake of a growing liquidity crisis that has engulfed some of the country’s biggest and most indebted developers.

Most analysts, however, expect demand and supply to return to more normal conditions by the end of the year or early 2022 as regulators tweak their policies to stabilise the sector.

Prices of new homes dropped 0.2% on average last month from September, according to Reuters calculations of data released by the National Bureau of Statistics (NBS) on Monday, the first decline since March 2015. In the resale market, prices slumped in all but six of the 70 major cities tracked by the bureau.

On the supply side, new construction starts plunged 33.14% on year in October, extending the 13.54% fall in September, while overall investment by developers in projects dropped 5.4%, deepening from the 3.5% decline a month earlier, Reuters calculations of the NBS data showed.

Tougher regulations on new borrowing since the summer of last year have squeezed developers financially and cast an ever lengthening shadow on new projects. China is expected to stand firm on policies to curb excess borrowing by developers and speculative home purchases, although it has eased financing conditions to help genuine home buyers.

“Policies will become more and more relaxed, and the market is expected to gradually stabilise, as the purpose of regulations is to stabilise the market, with it neither sharply rising or declining,” Zhang said.

Authorities said in September that banks ought to offer financial support for genuine home buyers with so-called “rigid” demand, referring to purchasing or renting from those recently married or seeking low-cost housing.

New mortgage loans jumped 40% in October from the previous month to 348.1 billion yuan ($54.55 billion), although the amount was just 7% above the monthly average in the first nine months of the year.

Some Chinese banks in recent weeks have sped up the disbursement of home loans to support sentiment among buyers, but no fresh wave of new approvals have been granted to lenders, bankers previously told Reuters.

“The market is expected to bottom out at the end of the year or early next year,” as supply and demand for mortgages will return to normal, said Xu Xiaole, analyst at Beike Research Institute.

In October, monthly prices rose in 13 of 70 cities, less than 27 cities reporting price gains in September, the smallest number since March 2015.

During the month, homes sales tumbled 22.65% on year to 1.24 trillion yuan, Reuters calculations showed, the fourth straight decline and the lowest this year.

In the resale home market, prices in 64 of 70 major cities tracked by the NBS declined, with prices in two unchanged and higher in four.

Resale prices have fallen in nearly all cities so far this year, with at least 20 cities seeing declines in five months or more. In the southern tech hub of Shenzhen, prices have slumped for six consecutive months.