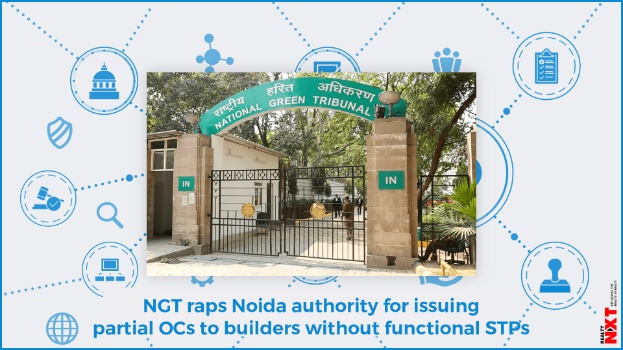 We are informed that partial occupancy certificates are issued to facilitate the builders to sell the flats which prima facie amount to offence.

The National Green Tribunal has rapped the New Okhla Industrial Development Authority (NOIDA) for issuing partial occupancy certificates to builders to sell flats without functional sewage treatment plants, and asked the Enforcement Directorate to act against the real estate developers for committing offences under the Air and Water Acts.

A bench headed by NGT Chairperson Justice Adarsh Kumar Goel noted that as against the claim of 72 STPs, only 12 of them are functional in group housing societies.

“We are informed that partial occupancy certificates are issued to facilitate the builders to sell the flats which prima facie amount to offence. This policy will have to be reviewed to effectuate the mandate under the EC/Consent conditions read with Water and EP Acts.

“Though learned CEO has stated that she will personally monitor compliances, it may not be practical unless there is a dedicated monitoring cell manned by qualified environmental professionals, taking of performance guarantees/deposits for performance from project proponents before permitting commencement of the project and also before giving occupancy certificate, engagement of accredited agencies to assist such monitoring, and effective community involvement,” the bench said.

The Inspector General of Police, Meerut Range told the NGT that IPC offences against builders are not registered due to provisions of the special law, the Environment Protection Act.

“This can be no excuse as IPC offence are also committed and taking of such action does not violate the special law. Further, Section 133 CrPC can be also invoked wherever necessary.

“Since earning money by committing offences under Air, Water, EP Acts amounts to offence under Section 3 of the PMLA Act, 2002, the Enforcement Directorate needs to look into the matter to proceed against violators and colluders in such offences, as per the mandate of law,” the bench said.

The green panel, in a recent order, also directed the authorities to ensure that no waste water enters from the Kondli drain into Noida.

The Kondli STP should comply with standards and adequately cater to the need of designed capacity with proper utilisation and disposal of effluents, it said.

The tribunal was hearing a plea filed by Noida resident Abhisht Kusum Gupta against disposing of sewer waste in the irrigation canal near Sector 137 in the Gautam Buddh Nagar district.