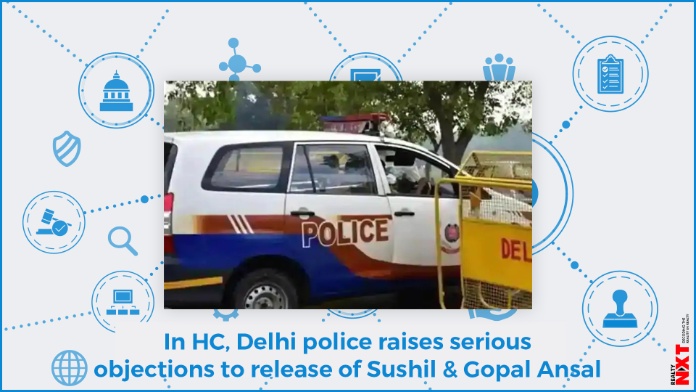 Justice Subramonium Prasad, who was hearing Ansals’ plea for suspension of their seven-year jail terms in the evidence tampering case, suggested releasing them on interim given their advanced age and the COVID-19 situation, while asking the trial court to decide their appeals against the conviction.

The Delhi Police Thursday told the High Court that it has serious objections to real estate barons Sushil and Gopal Ansal being released in the Uphaar cinema evidence tampering case due to the coronavirus situation.

Justice Subramonium Prasad, who was hearing Ansals’ plea for suspension of their seven-year jail terms in the evidence tampering case, suggested releasing them on interim given their advanced age and the COVID-19 situation, while asking the trial court to decide their appeals against the conviction.

The judge also observed that even during the previous two waves of the pandemic, persons involved in offences for which the two petitioners are convicted, were released on bail.

Senior advocate Dayan Krishnan, appearing for the prosecution, stated that the petitioners would get the benefit of any policy of release of inmates after it is formulated by the authorities concerned and assured that the jail doctors were taking all possible care of the petitioners who had “nothing special about them”.

“Whether there is a second wave or a third wave, it is really something which is a policy decision and not about an individual person. A convict cannot be better than the other. When a policy (on release due to COVID-19 comes), they will get the benefit,” he submitted.

The senior lawyer further stated that the nature of offences was such that the “entire system was put in peril” and medical condition of the petitioner during the pandemic cannot be a ground for their release after the suspension of sentence.

“We have serious objections. There are jail doctors, jail hospital. They are taking every possible care…It can’t be a ground for suspension..The nature of offence (was such that) conscience would be shocked. The entire system was put in peril,” he added.

On December 3, a sessions court here had rejected the Ansals’ plea to suspend their conviction and jail term in the evidence tampering case by a magisterial court and refused to release them on bail.

Subsequently, the Ansals had moved the high court which had sought response from the city police and complainant, Association of Victims of Uphaar Tragedy in the matter.

Senior advocate Arvind Nigam, representing Sushil Ansal, contended that the “mutilated” documents were not even relevant to his culpability in the main Uphaar trial and his conviction in the evidence tampering case was a “travesty of justice”.

“Mutilated or missing or destroyed documents from court record does take away by original sin,” said the senior lawyer who submitted that secondary evidence was recorded on the missing issues and the same was not objected to during trial.

He highlighted that his client was over 80 years of age and suffered from various ailments.

Senior counsel Abhishek Manu Singhvi, appearing for Gopal Ansal, also argued that his client was over 70 and the court should exercise its wide and liberal discretion to release him.

He emphasised that there was an “inevitable long pendency of appeals” before the trial courts and even during trial, Gopal Ansal was on bail.

“He is at the wrong end of the stick due to media attention,” the senior lawyer claimed.

The court was also informed that in the main case, the petitioners were convicted and sentenced to two-year jail term by the Supreme Court which subsequently released them on payment of Rs 30 crore fine each after taking into account the prison time they had done.

The court listed the case for further hearing on January 11.

While dismissing the Ansals’ plea for the suspension of sentence till the appeal against the conviction by magisterial court is decided, the sessions court had said that the case was one of the gravest of its kind and the offence appeared to be the outcome of a calculated design on the part of the convicts to interfere with the course of justice.

The sessions court had also refused to suspend the seven-year jail term each to former court staff Dinesh Chand Sharma and two others — P P Batra and Anoop Singh — in the case and release them on bail.

The tampering was detected for the first time on July 20, 2002, and when it was unearthed, a departmental enquiry was initiated against Sharma and he was suspended. Later an enquiry was conducted and he was terminated from service on June 25, 2004. The magisterial court had also imposed a fine of Rs 2.25 crore each on the Ansals apart from seven-year-term in the case.

The case was lodged on the direction of the Delhi High Court while hearing a petition by AVUT chairperson Neelam Krishnamoorthy The fire had broken out at the Uphaar cinema during the screening of the Hindi film ‘Border’ on June 13, 1997, claiming 59 lives.